So you want to become a HR consultant?

What were you doing 12 years ago? Considering a career in HR, coordinating a company's HR, or perhaps you were developing an HR toolkit for New Zealand businesses?

For Viv Patterson it was the latter. Founder of EQ Consultants and vice president of HRINZ Canterbury, Viv shares her journey of becoming an HR consultant - the highs and lows, and how expectations align with reality.

"I was contracting at the time, helping to develop policies and processes for a Canterbury-based university when it occurred to me how many organisations could benefit from a handbook outlining all of the HR policies and procedures to ensure legal compliance.

"I had been in HR for more than ten years, from managing teams for larger organisations in the health sector to contracting with small / medium-size businesses, many of which didn't have policies in place or understand what HR was. Therefore, I knew that there was a need for a HR handbook for the smaller size companies. I teamed up with my partner and a former colleague and together we launched an HR toolkit and EQ Consultants was born. Between the three of us, we had all worked with different size organisations so we had that aspect covered."

Equipped with an HR product, a team of sales people and consultants, Viv and the other directors were sure that they were on to a winning formula.

"We had the idea and we thought it would just work, so we employed two sales people, two other consultants and bought some cars so that they could get out and about. However, it was really hard starting out and we made some major mistakes in thinking that it was just going to take off. Largely because I was very naïve around business practices. We just thought we had this good idea and that businesses would need it so they would recognise that and just invest. We also wrongly assumed that people with sales experience and no HR background could sell the product - but it didn't quite work like that. Learning about the sales process was quite foreign to me; even though you negotiate a lot throughout HR, it's a different kind of negotiation process with sales.

"After that we changed the business model and the directorship. Craig Atkinson, then a year later Steve Kennedy came onboard and the company's offerings broadened. They brought a different approach to business and new elements, which allowed us to develop into recruitment and training. I'm not a sales person, but that's where Steve and Craig came in; we all have different skill sets and we now have a team that reflects that. It's all about embracing diversity, which I think we definitely do and will continue to do so as we grow."

Team dynamics and being 'punch drunk'

Viv explains how her experience of being in a team changed and the surrounding culture...

"I had been working in health for a long time and I'd done the circle of change; when a new government comes in, there's a wave of change to the right and then another Government comes in and there's a wave of change to the left. You get a bit 'punch-drunk' around having to support the organisation’s latest initiatives because you have to be 100% on board with them; I think there comes a point where you get fatigued by that because you might not believe in the changes but you have to implement them. One of the things I was looking forward to was working with people who had no HR support at all, who were making mistakes and needed some guidance. One of the things that our clients really like is that we're independent, we don't have the same emotional connection or relationships so we're more objective and we're there as their support so we're clearly working for them and their interests without any other agenda."

Wanting to make the step to go it alone and become a contractor or consultant? As Viv learned, you can never be too prepared...

"Initially, when you're consulting you're worrying about 'why is it quiet?' and 'where is my income going to come from?', and then you're absolutey frantic and you've just got to keep going because there's no one to cover you. As a contractor you'll go into an organisation and work for six or twelve months as an HR manager, where you're usually part of a bigger team that understands HR. However, as a consultant, you spend a lot of time explaining what HR is about and understanding each and every business.

"You become much more aware of how decisions can directly impact a business and the person you're working with; it's their money, their livelihood, their house; their entire business is on the line so it's a different dynamic. I think that initially, I was quite idealistic around that; I thought it would be a bed of roses, that people would just want our services and the money would just flow because we had a really good idea, why wouldn't it sell? This was my business naivety coming through.

"When I talk to a lot of my HR colleagues and some fellow members of HRINZ, the impression that I get is that they don’t know what value they're adding to the company because it's not clear to them or HR is not always appreciated within a company. Whereas, being a consultant, you either have a contract with a business or you don't, so you're getting instant feedback from them of the value you are bringing.

"Overall, it's a different approach; consider the pros and cons of providing an external service as opposed to being part of an internal team; where are you going to get your satisfaction from? It's not always what you think it's going to be."

"As a consultant the responsibilities change throughout and you make sacrifices because you have to. When you first go out there on your own, you need to identify your unique selling point within HR; it's all about your own personal brand and how you develop that. As a consultant or a contractor, you always have to consider what you're doing and what is that costing. Unfortunately, time is money which isn't always a reality you want.

"Fortunately, I had security and everything else around me was stable which allowed me to concentrate on consulting. Consider who you are going into partnership with and what life stage are you at; are there people who are dependent on you? Establish what it is you like and dislike about what you're doing because it's very easy to buy yourself a job and work three times as hard for the same money.

"The great thing about more people getting into HR consulting is that we're educating businesses about how necessary and important it is to have an HR service. You're effectively an external HR department but ultimately you need to decide which areas you enjoy working in. Be aware of the areas where you're not competent or confident, because at the end of the day, it is your personal brand and your reputation that makes or breaks your success. The advantage of a bigger team here at EQ is that we have a range of skills that complement each other and take a team approach to meeting the client’s needs."

Viv has been a member of HRINZ for almost 20 years and last year she joined the Canterbury committee as vice president.

"I joined HRINZ for three main reasons: being part of a professional body and the credibility that this brings, networking opportunities with colleagues in the same field and to keep myself up to date with changes in the profession. There's so much on offer with HRINZ that, even now, I'm not aware of or utilising fully. The good thing about being on the committee is that I've developed another network of people who are at different stages in their careers and hearing what's going on for them is really useful in understanding what's happening in different industries and how we can help each other.

"Being a consultant means that you're a master of your own destiny, deciding where you want to go and how you want to do it. This is one of the reasons why I joined the HRINZ Canterbury committee as vice president at the beginning of last year. It has allowed me to become more actively involved in the branch over the last few years and to give something back. It's great being on the committee."

Is being an HR consultant worth it?

"Absolutely! Initially it was really hard work and there were a couple of years where we just broke even. But we're 12 years' down the track now and the rewards are definitely worth it. We've got a great team, we've diversified in terms of the services we provide and I really enjoy the client relationships and seeing how their businesses are growing.

"Be persistent and push through the tough times." 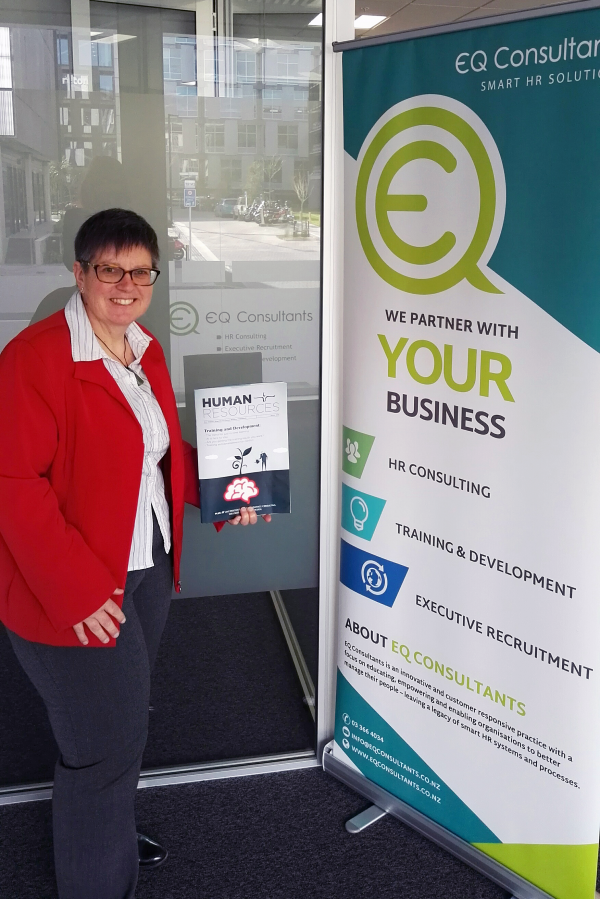 Our Helpdesk, document library and knowledge base are available to all HR Today customers.

Get started with an HR Today account, starting from just $199 per month.

The cyber-world faces threats that are more malicious in nature and driven by people. These hackers are in it for financial gain and can devastate...

We were lucky enough to have Mark Darvill from Riccarton Clinic and After Hours Medical Centre come in and speak about how he lead his...

It is not uncommon that we come across an employee who has a significant amount of annual leave accrued.

We love working with innovative businesses that see the value in investing in their people.

Read More
Is staff training worth the time and costs?

Making sure that employees have the right skills, are challenged and have the opportunity for development in their role is one of the fundamental responsibilities...